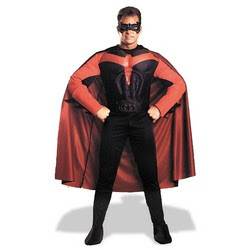 I am flying back to America later this morning, where I’ll be occupied on business for a couple weeks. This means I’m a little pressed for time just as “Gladly Lerne, Gladly Teche” approaches a possible crisis. I long ago sensed that I would be dipping into the danger zone if the number of blog postings overtook the number of registered Followers. That is just about to happen. Furthermore, the blog has not elicited any readers’ comments for a month. It’s one thing to lecture to students you suspect are not listening, quite another to write essays for readers who aren’t there. Maybe it is true, as one trusted friend tells me, that the blog is such a debased form that its only audience is one whose favorite genre is the political rant. I don’t really believe that, but as ranting requires little time and less thought, I’ll rant away.

One of my birthday presents was a copy of Pierre Bayard’s How to Talk about Books You Haven’t Read. Perhaps I’ll have something to say about it when I’ve read it, but just holding it in my hand has empowered me. I now feel confident about talking about a film I haven’t seen: Waiting for Superman. It’s a little hard from abroad to tell what is really big at home in America even from faithful visits to a few trustworthy websites, but Waiting for Superman pretty clearly is or ought to be big. As I do not know from experience, Waiting for Superman is about a group of kids trying, by lottery, to get out of their dreadful public schools and into supposedly much better charter schools.

I spent a career in education, with more than forty years of classroom experience. I am well aware that one size does not fit all, but I do think I know how our schools could be improved. I have three suggestions. But only one has to do with Superman (the teachers), the other two with Robin (the pupils).

My suggestion about teachers is this. Teachers ought to be real experts in an actual field of study: mathematics, biology, physics, English language and literature, Spanish, whatever. If teachers are going to be required to have advanced degrees, let those degrees be in a real subject and not in “Education”. During its golden age, the old German Gymnasium was staffed mainly with Ph.Ds. Lord knows we need all the thoughtful and innovative education experts we can get; but actual teachers ought to know a lot about what they teach, and they ought to have the opportunity to continue to learn more throughout their careers. Everybody knows that deep knowledge of a subject matter is not a guarantor of good teaching. Unfortunately many educational administrators seem to think it is an impediment.

In my career I taught many well-received special seminars for high school teachers, and it was clear to me that what the teachers most appreciated about them was their serious scholarly content. Naturally this evidence is valueless to the educational establishment because it is impressionistic and anecdotal. The only evidence worth having is evidence supported by “research models” and “studies,” most of which will then “show” something counter-intuitive. When the anecdotal strays across the frontier of the politically correct it becomes the stereotypical.

Thus if an academic sociologist publishes a book full of tables showing that 82% of Middle-Patagonian speakers live in mud huts, that 73% of them are functionally illiterate, that 78% eat Pringles at least four times a week, that 92% percent wear sarongs, and of that number 98% percent wear them back to front, that is a work of social science. If an observant novelist creates a fictional Pringle-chomping, sarong-wearing Middle Patagonian speaker who lives in a mud hut, that is a negative stereotype. And if Middle Patagonian speakers were in any way to be a racial group—instead of being, as they are, entirely imaginary--it would then be a doubly damnable racial stereotype. Someday I may write an essay on the utility of stereotypes, but not today.

Having established the first pre-requisite for high-achieving teachers, let me eschew both anecdote and stereotype in proposing in abstract terms the two first pre-requisites for high-achieving students. They both involve the necessity of distinguishing what is a reasonable role for the public schools and what is not. The first is that the student before he or she ever steps across the school threshold be provided with two loving parents with whom they live in reasonable tranquility and regularly take their adequately nutritional evening meals, at which occasions they frequently hear and/or participate in conversation of a general nature, often including words of three and four syllables. Let there also be a few books, magazines and newspapers around, and let the children see their parents reading them from time to time. These conditions should prevail throughout the entire period of primary education, and indeed beyond. There will always be exceptions to an ideal norm. But if on a massive scale it proves impossible to provide such conditions, we have indeed discovered a grievous and heart-rending social failure, but it is not a failure of the school system, and certainly not a failure of those children’s teachers; and it will not be remedied by any conceivable policy or program emanating from the Department of Education. Heroic teachers will do their level best to overcome such huge obstacles, but they will succeed only very rarely and, so to speak, anecdotally.

The second and closely related pre-requisite is that Robin really has to want to be Superman’s sidekick. Students from an early age should really want to learn, to do well in school, and to work hard to do so, both in and out of the school buiding. They should be encouraged, directed, and indeed disciplined by their parents toward high-achieving goals. Any good teacher will try to be “engaging” and make a serious effort to “meet the students where they are”; but contrary to anything you might have picked up from The Dead Poets’ Society, teachers are not actually entertainers, shamans, or thaumaturgs. We have so greatly “defined deviance down” in Pat Moynihan’s fine phrase, that student laziness, vulgarity, chronic indiscipline, recalcitrance, physical and intellectual slovinliness, and general yahooism have become the accepted platform upon which our teachers are expected to work in many of our urban schools. Many teachers have known no other context. These are not, however, features of a universal human nature, but socially learned and socially tolerated behaviors. You will not find schools or school children like ours in Iceland or South Korea. You didn’t find many of them here fifty years ago.

There is a great deal of talk these days about unfairness and inequality in our society. The alternatives as I see them are to embrace the truly failed efforts that the last century came up with to establish a fictive equality of results, or to work to restore the means of a genuine equality of opportunity. The great engine of social mobility in America is education and the opportunities that flow from it. I know this from intimate experience. Those who are sincerely concerned about the grievous problems we face will start by talking frankly about the chronic ailments of which our failing schools are merely grotesque symptoms.

At a rally against violence, Chicago IL 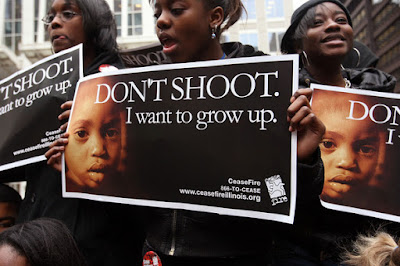 SIGNS OF THE TIMES

THE STUDENTS HOLDING THEM 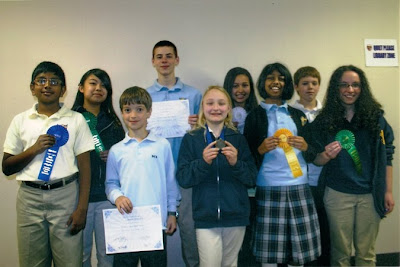