A Short Story by John O'Hara 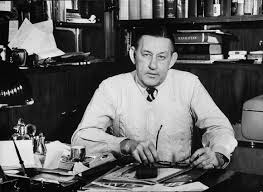 
The short story is not an American invention, but American writers at least since the time of Poe have developed it with a special inventiveness.  There was not a lot of fiction on the dusty shelves of my boyhood home, but there were more volumes than I could believe by O. Henry, who, I thought, must be the most famous and productive writer in our country.  Many years later I learned that there were many people—including the kind of people who grew up in big houses in Fairfield County with real libraries before going to school at St. Paul’s—who never heard of him.  I am not sure I ever heard his name mentioned in forty years of conversation with learned colleagues in my English Department.  But he was big in my early reading life.  O. Henry (it’s a pen-name, of course), who died before the beginning of World War I, was a master of the “surprise ending”.  The influence of De Maupassant is pretty obvious, but I hadn’t even heard of him at the time.

The genre is called the short story for a reason.  It has to do whatever it is going to do—or not do—fairly quickly.  In the short story the not doing part can be quite as important as the doing.  Think of the masterpiece by Henry James, “The Beast in the Jungle,” in which nothing happening is what happens, unforgettably.  Quite often the reader doesn’t get a subtle short story in a single reading.

I have recently been reading in a collection of stories by John O’Hara, who virtually dominated the fiction pages of the New Yorker when I was in college.  O’Hara does have a few “surprise endings,” but they are generally prepared for by what I shall call the unnoticed middle.  A couple of nights ago I read one of his gems, “Appearances”.  This story appeareded in 1962 in a collection, one of the few of his stories  not first published in a magazine.  Admittedly, I was nodding; but when I got to the end while I was sure that something had happened, I could not tell you exactly what.  O’Hara is the chronicler of the middle classes of the Main Line—meaning roughly the stretch of the Pennsylvania Railroad from Philadelphia to Boston, with emphasis on the former—during the years of post-War affluence and social malaise.  His natural peers are Updike and Cheever, but he has a sadness all his own.  His themes are perhaps the usual: mortality, adultery, alcohol, missed opportunity, inescapable pasts.  Several of those themes were in “Appearances,” but determining what it was about would require a second reading.

The mode of “Appearances” is third-person narration, but its principal character is one Howard Ambrie, middle-aged nondescript bourgeois living comfortably with his wife Lois on Long Island.  The couple have just returned in their car from some evening event.  We learn early on that their recently divorced daughter, a teacher, has temporarily returned to the family home.  The first part of the story details a conversation, or perhaps an argument,,  between Howard and Lois.  At issue is whether Howard plans on the following day to attend the funeral of somebody named Jack Hill.  Hill, we learn, was a friend of Howard’s for fifty years, though the closeness of the friendship is questioned in subsequent dialogue.  Jack’s bereaved widow, Celia, is likewise an old family friend.  Lois is rather shocked to hear that her husband does not intend to be at the funeral, and especially shocked at the reason he offers.  He has scheduled a game of golf he doesn’t want to miss.  After a certain amount of revelatory bickering, however, he does agree to go to the funeral after all.

The rest of the story takes place in the daughter’s room, where she is visited first by her father and then by her mother.  We quickly learn that the daughter—and the divorce triggered by her sexual impropriety--is relevant to whatever is or is not happening.  She seems to be an only child, and has an apparently frank and open relationship with both her parents; but the eavesdropping reader soon discovers that the intimacies of her parental communication are delicately compartmentalized.  In what seems a careful deference to the daughter’s agency and independence, her father has chosen not to inquire too closely into the details of the extra-marital affair with an unnamed married man that doomed her marriage.  His hopes are now for the future, and for her prospects for a second marriage with a doctor she has been dating.  “This time,” he advises her, “you ought to have children right away…It might have kept you together, Amy, a child.  We had you the first year, your mother and I.”
Not surprisingly, the daughter is quizzical:
“’Father, you’re practically implying that if you hadn’t had me…’”
“ ‘I know what I’m implying,’ he said.  ‘And I know you’re no fool.  You know it’s often been touch and go with your mother and I.  You’ve seen that.’”
The main literary theme here, I suppose, is the familiar one of the reduplication of pathologies within families.  But O’ Hara is an absolute master of middle class vernacular.  We don’t quite know Howard Imbrie’s place in the great scheme of things until we listen carefully.  As we learn in the story’s first line he lives in a house with a “porte-cochère,” and he presumably would never say “Me and my wife went to the movies.”  But he does say “…with your mother and I.”  As grammatical solecisms go, this one is no big deal; but it serves as what I have called as “unnoticed middle” for its story—unnoticed by me, at any rate, on first reading.
Imbrie bids his daughter goodnight and leaves the room.  But the mother soon enters it, asking her daughter, “What was that all about?”  Now we discover that the intimacy of mother and daughter, at least so far as the subject of “Appearances” is concerned, is more along the lines of a conspiracy.  But even in revealing what the reader must already be suspecting concerning the man to be buried on the morrow and the Prodigal Daughter, O’Hara deftly uses the heart-to-heart between Amy and her mother to bring out further sad limitations and bigotries that seem perhaps to come with the porte-cochère.  The author does this all in about three thousand words.  Just between you and I, this is no mean trick.