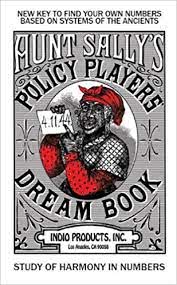 While on a recent Gothic streak I briefly revisited Daphne du Maurier’s Rebecca.  It was published when I was two, but has aged a great deal better than I.  What a story!  And what a great opening line: Last night I dreamt I went to Manderley again. Perhaps it is because my own dreams are so infrequent, so paltry, and so seldom remembered that I have made a subspecialty of literary dreams, in particular the medieval genre of the dream vision.  I was already thinking about dreams when the latest number of Cabinet: A Magazine of Arts and Culture arrived at our house.  Should this journal by some oversight not regularly grace your own coffee table, you should know that it is highly hip.  Though I try to stick to the pre-Copernican scene, it is hard to preserve one’s old-fogey credentials unsullied if young people play any significant role in your life, as is likely to happen with college professors and grandfathers.  The brilliant editor of Cabinet, Sina Najafi, was a college friend of my son Richard.  Later I met his likewise brilliant spouse, the artist Nina Katchadourian.  Cabinet has some other Princeton connections.  One of its principal editors is a brilliant historian of science here.  So, you grasp the recurrent leitmotiv: brilliance, if sometimes rather quirky brilliance. 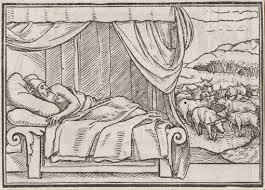 
Each number of Cabinet includes several short essays devoted to a common theme.  For issue number sixty-seven it is “Dreams”.  Of several interesting articles, one devoted to the prominence of dream books and soothsaying in African-American popular culture captured my attention.*  The author has uncovered a small library of cheap dream manuals popular among a black readership in the nineteenth century.  I was struck by the essentially medieval character of the books described.  Dream “theory” underwent a huge paradigm shift with Freud and other modern psychoanalysts.  Freud’s Interpretation of Dreams (1899) tries to explain the dreaming process in terms of the oblique expressions of a unique and individual subconscious as experienced by a unique individual consciousness.  Dreams are deeply personal.  This is very different from pre-modern dreams, regarded as objective external communications not generated by the dreamer, though frequently requiring decryption.  They were messages from the gods or the God. In ancient Greek religions, people would sometimes sleep in temples, hoping thereby to “incubate” revelatory dreams. The Bible offers various examples of revelatory dreams, particularly with regard to the two Josephs: the vizier of Egypt (Genesis 41) and the husband of Jesus’s mother (Matthew 1 and 2).  As we shall see, Egypt was especially important for dream lore.

The Aesculapion of Pergamum in Anatolia, where ill patients tried to dream of cures

The great classical work on the subject is the huge Dream Book (Oneirokritikon) of Artemidorus of Ephesus, who lived in the second century.  Perhaps you can find a casual way to drop the word oneirocriticism, dream interpretation-- from Greek roots meaning “dream” and “judgment”-- into your next conversation with a work mate.  Artemidorus’s book is actually a kind of encyclopedic compilation, running to five volumes in its modern edition, of the earlier works, otherwise all lost,  by many experts in what was a popular genre.  Ancient dream books were generally practical reference works to be used for purposes of decoding.  What did it mean to dream of an eagle, gold ducats, or a meal of fermented barley?  The dream books could tell you—in a rather mechanical and brain-dead fashion.   A considerable increment of subtlety was added to the field of dreams a couple of centuries after Artemidorus by a Neoplatonist scholar named Macrobius, who wrote one of the more surprising perennial best sellers in European cultural history: A Commentary on the Dream of Scipio.  Macrobius’s great contribution was to draw distinctions and to provide categories.  To begin with, not all dreams were significant.  Many were nightmares sent not from the gods but (as Ebenezer Scrooge would have it) from “a bit of undigested  beef, a blob of mustard, a crumb of cheese.”  Of significant dreams there were several kinds, and they required learned distinctions.  Macrobius disdained the simplism of the old dream book.  Dream interpretation required learning, wisdom, and great skill.  Hence, in the high culture, the frequent connection of oneirocriticism with cutting-edge astrology and mathematics.  One thinks of Dr. Dee, Queen Elizabeth’s resident astrologer.   But there was always also a popular or folk level, usually associated with wizened crones or “witches”.  These are the distant posterity of Ovid’s vetulae (little old ladies), women of sinister fascination, go-betweens and abortionists.

If dreams can be interpreted, they can be misinterpreted, with possibly fatal results.  We have, for example, the dream of the tyrant Croesus.  He dreamed that the god Jupiter washed him and that the god Apollo dried him off.  He thought this a wonderful harbinger of a well-deserved visit to the Turkish baths on Mount Olympus.  But his daughter Fanny, the local Cassandra, had a sounder if sadder interpretation.  Croesus was hanged from a gibbet.  Jupiter Pluvius drenched the dangling corpse with rain, and the scorching rays of Apollo the Sun dried it out.  The requirement of an expert exegesis, when a mistaken interpretation could have such dramatic real-world consequences, is what makes much medieval dream vision so interesting.  Misinterpretation can also be comic, as it is in Chaucer’s epic of chicken sex, the “Nun’s Priest’s Tale.”

The popular “dream books” of which Vandegrift writes in so illuminating a fashion actually have very little to do with the tradition of Artemidorus and practically nothing at all with that of Macrobius.  They don’t even have all that much to do with dreams.  Nor, actually, am I convinced of any peculiar African-Americanness to be found in them.  Apart from their  obvious target audience, one of several non-traditional readerships of their time, they fit comfortably into a familiar category already well established in the eighteenth century.  Dream-interpretation very early became conjoined with various kinds of divination and soothsaying, especially when related to financial fortune: coming into or finding, money, lost objects, buried treasure, divining lottery numbers and winning horses or the like.  In America, especially, a lottery game called Policy commanded something of the huge number of habitual, addicted players  who today follow Power Ball.  The “dream manuals” combine folk superstition with the incipient format of family board games or fortune cookie slips in providing a diverting procedure for arriving at comforting “news”.  The mother lode of nineteenth-century folk divination was the hugely popular Oracle of Napoleon, the magic manual supposedly found by the Emperor in a pyramid—Egypt being since time immemorial the source of esoteric wisdom for European crackpots.  For Napoleon the Oracle was apparently indispensable for conquering the world.  It continued to provide lesser mortals (for only a dime!) with an ingenious way to tell their own fortunes by making recourse to its interrogatories, charts, and tables.  (You can find an amusing introduction to it here).  And since it was plagiarized from a learned Renaissance humanist steeped in the Egyptomania of his age, it still has the faintest whiff of an ancient bitter perfume.  I have written a little about this in The Dark Side of the Enlightenment. 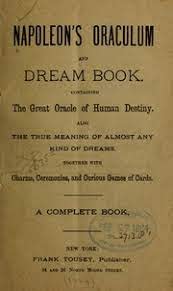 One of dozens of cheap editions of Napoleon's Oraculum

Seeking to ascertain knowledge of future events in the hopes of financial profit or other personal benefit—insider trading at the supernatural level, so to speak—has always been considered dubious from the moral point of view.  In his epic poem on the Civil Wars, Lucan presents his great Stoic hero Cato with a temptation.  An opportunity presents itself for Cato, while marching through the African wilderness,  to consult the oracle of Jupiter Ammon.  He could thus find out whether he will have success in battle.  But Cato is not concerned with whether he is on the winning side; he is content to be on the right side.  So he declines to visit the oracle.  Dante describes diviners as those who “would attempt to constrain the Divine will.”  But high mindedness from the high culture was entirely foreign to these proletarian pamphlets which, in feeding fantasies of the lucky strike and the big payout, served a purpose and met a demand.  Like blues songs or work shanties, they might serve to amuse, distract, or give transitory hope to some humble folk whose daily lives were filled mainly with hard labor, material difficulty, and limited horizons.   And after all we all do have to dream, and we all do dream.  Should you happen to dream that you went to Manderley again, I do have some practical advice.  Write that down, and then just keep on writing.  You may end up with a real dream book.