Forty Shades of Scarlet and Gold 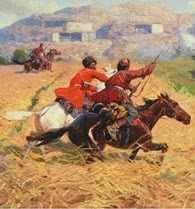 Stories of national heroes who defy the imperial power of their oppressors account for some of the great books in our literature.  In ancient times a beautiful young Jewess living in the Persian diaspora, Esther, saved her people from a planned genocide and turned the tables on her chief persecutor, Haman, the sinister vizier of King Ahasuerus. The world got the biblical Book of Esther, and little Jewish kids got a really fun holiday, Purim.  Or in more recent times how about two Chechan brothers willing to take on the might of Russia, with the one desperately carrying on even after the other is slain.  That’s the stuff of historical novels, and in particular Tolstoy’s last novel--Hadji Murat, a wonderful read and in retrospect a timely meditation on the complicated realities of “multiculturalism,” and the difficulties of finding harmony in cultural “diversity”. 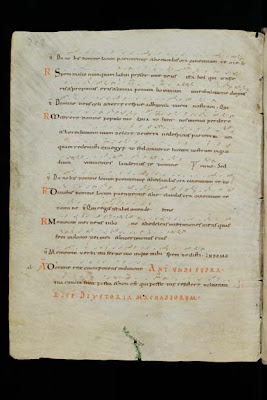 A medieval liturgical manuscript from the Abbey of Sankt Gallen.  The phrases in alium and in alio are both grammatically admissible

The drama of last week’s blog subject (the Boston Marathon bombing) was still lively for several days following the post, and like probably too many other people I spent some hours last Friday following the intense search for a  'teen-aged terrorist who had brought a great city to lock-down and, incidentally, kept a dear friend from visiting us from Boston.

The next day, Saturday, we went into New York to spend the evening with family members and to be in place for a long-anticipated event on Sunday—an early-afternoon concert of Renaissance choral music to be performed in the Fuentidueña Chapel at the Cloisters—the fabulous medieval satellite of the Metropolitan Museum of Art.  Our original plan had been to meet up with a group of fellow motet-lovers for a pre-concert brunch, but near the last moment the key organizer had to drop out on account of a domestic emergency.  As it turned out, we would never have made it to the restaurant on time anyway: we had been unaware that the “A” train service would be seriously dislocated on account of weekend work on the tracks, requiring long waits and intermediating shuttle buses. 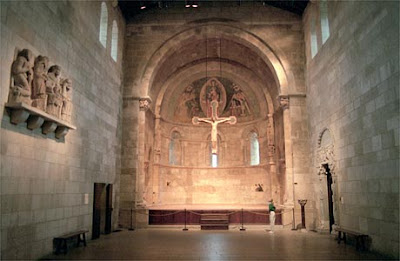 The ancient and expertly relocated stone blocks of the Romanesque apse of a medieval Spanish church, San Martín de Fuentidueña, have been on loan to the Met by the Spanish government since 1958.  The reconstituted chapel is one of the most spectacular galleries in this or any other museum.  It is dominated by a stunning period piece, a huge hanging crucifix, in which the sculpted corpus perfectly captures the theological ambiguity of the event depicted.  Is this a triumphant king painlessly reigning from his oddly shaped throne?  Or a tortured and humiliated criminal in his hideous death throes? 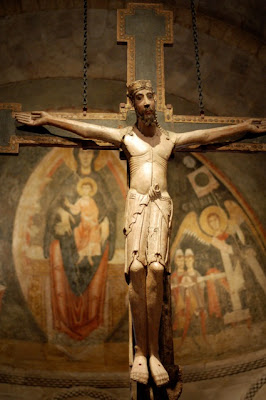 On Sunday last the chapel was transformed by the importation of folding chairs into an acoustically brilliant music hall for a performance by Pomerium, an “early music” choral group directed by Alexander Blachly.  The organizing theme of the concert was “Music for Mary Tudor”.  Though the program avoided the indelicacy, that would be bloody Mary (1553-1558).  The pieces, all in Latin and all liturgical, boasted such composers as Byrd, Sheppard, Tallis, and White.  The concert’s finale was Thomas Tallis’s incomparable Spem in alium.

To get my own prejudices out on the table, it is my opinion that Mary did one really good thing in her life: she refrained from murdering her half-sister Elizabeth.  If she also was the patron of Spem in alium—the questionable conjecture adopted by Pomerium’s program notes—that would make two. 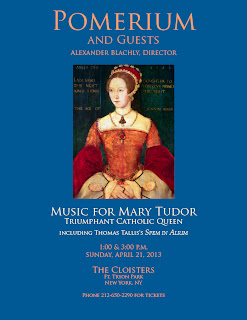 Spem in alium is a motet for forty voices—yes, forty.  These are distributed into eight choirs of five each, with the choirs physically distributed for maximal acoustical effect.  The circumstances of the original sixteenth-century performance are conjectural, but in the Fuentidueña chapel the director created a linear arrangement surrounding the audience in a large horseshoe around the chancel and half the nave.  You know the expression “the eye of the storm”.  Now imagine yourself in the eye of a storm of rapture. (I have been alarmed to discover that sales of recordings of Spem in alium have spiked since the appearance of a vastly popular work of pornography in which the piece plays a perverse narrative role—but one may regard this expansion of the Thomas Tallis Fan Club as a gift horse to be spared oral examination, perhaps?)
We must return, however,  to Queen Hester and the Chechen freedom fighter Hadji Murat.  That turns out to be surprisingly easy to do.  The Latin text of the motet, which comes from one of the old monastic offices, begins thus: Spem in alium numquam habui / Praeter in te, Deus Israel…    (I have never put my hope in any other but you, God of Israel…)  This is not a biblical quotation, but it is nonetheless a biblical text, a paraphrase of the beginning of the penitential prayer of Esther (Esther *14:3): “Dominus mi qui rex noster es solus adiuva me solitariam et cuius praeter te nullus auxiliator est alius” (O my Lord, who alone art our king, help me a desolate woman, and who have no other helper but thee.)  In the Anglican Prayer Book of 1662 this same text is reflected in a passage in the order of daily evening prayer:

V.  Give peace in our time, O Lord.
R.  Because there is none other that fighteth for us, but only thou, O God

God metaphorically “fighting” on behalf of mankind is a lovely if startling poetic idea.  Men literally fighting on behalf of God, on the other hand, has been an utter and dismal historical disaster.  It is long since time that the idea be junked.  As Rodney King said, "Can't we all just get along?"  And as Archbishop Cranmer said, "Give peace in our time, O Lord".   As for “cultural diversity,” Thomas Tallis may have something to teach us there, too.  He takes forty different voices and weaves them into a unified musical textile of dazzling beauty.

*The Hebrew text of this book, from which the English Authorized Version was translated, ends in the tenth chapter.  The medieval Christian Bible (the Vulgate)—from which the monastic liturgies were constructed--contains six additional chapters which had been interspersed in the Septuagint (the old Greek version of the Hebrew Scriptures).
Posted by John V. Fleming at 9:33 AM