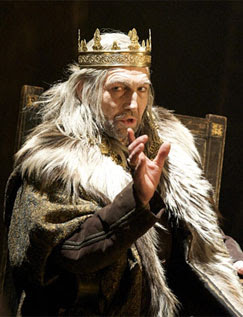 Readers of this blog have already “met” our remarkable friends Susan Saltrick and John Meyer with whom we have had such delightful summer experiences along the littoral of the Mediterranean crescent running from Livorno to Barcelona and, on one recent memorable occasion, on a boat between those two places.  Susan and Joan were the pilgrims, John and I the motorized support team who would show up at the end, vainly seeking to earn the crown without the inconvenience of first bearing the cross.  Well, our adventures continued on Saturday last when they treated us to a delicious brunch at their Manhattan apartment, then treated us to a matinee performance of the Royal Shakespeare Company’s King Lear at the Park Avenue Armory.

I am always pleased when things I have been saying for years on faith actually turn out to be true in empirical fact.  Heraclitus said that you cannot step into the same river twice, and Fleming has been saying that you cannot read the same book twice.  I have read King Lear many times, taught it more than once, and remember at least two earlier stage productions.  What I saw on Saturday was something entirely new to me.
I am not referring to novel features of David Farr’s production, though some were notable, not to say spectacular.  The Armory building, for those who have not visited it, is itself spectacular, accurately described by its promoters as “part palace, part industrial shed”.  I learned from my friend John that the palace part—capaciously conceived and sumptuously decorated reception rooms—was the fruit of a collaboration between Stanford White and Louis Comfort Tiffany.  The shed part, which has been the venue for nearly every conceivable genre of event and exhibition, including the antiques extravaganza, has for this summer season been turned into a kind of Erector Set version of Shakespeare’s Globe Theater. 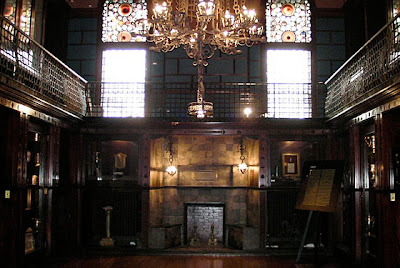 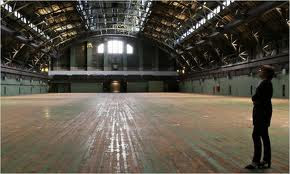 ...in which to rebuild the Globe Theatre with industrial strength Lego...
Its remarkable engineering allowed us to look down from the highest rung of its heavens, as one might from a helicopter or a mountain peak, at the pitiable carnage below.  That mountain might perhaps be Olympus, for as the blinded Gloucester says,

Those are great lines.  I had forgotten, indeed, just how many great “quotations” there are in this one play: sharper than the serpent’s tooth, come not between the dragon and his wrath, eater of broken meats, ripeness is all, the rack of this tough world…an anthology nearly endless.  But great lines are not necessarily true lines.  That was the new thing I saw this time.  Neither the play’s tragedy nor its horrors—and one can pretty clearly distinguish between the two—are brought about by the gods.
No, the secondary evils of the play are almost exclusively the work of Edmund, whose very essence embodies the plenitude of illegitimacy once resident in the now archaic word bastard.  He does get aid, not to mention comfort,  from the two bad daughters, but they are his victims as well.  As for the principal evil, it is all of it, every inch, brought about by old King Lear himself.   He is stupid.  He is foolish.  He is vain.  He is self-righteous.  Indeed, I left the experience with the feeling that there can be few other “tragic heroes” in the dramatic repertory less justified in claiming, as Lear memorably does:

Does Lear have even that minimum of grandeur and dignity that would be demanded by any even vaguely Aristotelian sense of tragedy?
Well, yes, when you see this production.  But he claims it on the basis of Shakespeare’s language, not on that of his deeds.  Lipstick on a pig actually improves the pig considerably.  This is, I know, heresy, for which I could be stripped of my English professor epaulettes.  But it is the conclusion I reached on Saturday.  The reason you cannot step into the same river twice is because the river is always changing.  The reason you cannot read the same book twice is because you are always changing.
After seeing the play we sought out the New York Times review by Charles Isherwood so we could know what we were supposed to think.  It turned out that the RSC production “can be strongly recommended for hypersensitive souls,” that it was a “competent but immaculately unwrenching production”.  I do not know Mr. Isherwood, but I am guessing that he is probably not a foolish fond old man negotiating the Great Generational Shift, nor the father of three adult children.  As a matter of fact this is my own first experience of Lear from that particular perspective, and I found it plenty wrenching and the hero maculate as all get out. 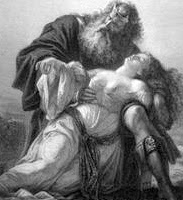