What Art is All About, by George 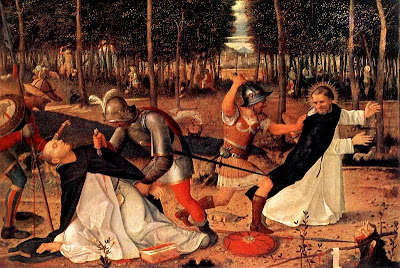 One of the principal interests in my scholarly career has been the interpretation of literary and pictorial allegory, a concept broadly defined by one famous ancient scholar as alieniloquium, “saying one thing to mean another.” Few general readers today read much literary allegory (though every educated person should have read and thought about at least a part of Dante’s Divine Comedy) but anybody who has ever set foot in the Metropolitan Museum, the National Gallery, or the Louvre has experienced pictorial allegory. How could Dan Brown have made millions out of such a poorly written and utterly hokey book as the Da Vinci Code if people weren’t already convinced that Renaissance paintings must be full of “hidden” meanings? Let no reader attribute my remarks to mere jealousy, incidentally. Spite also plays its part.

But the “hidden” meanings of Christian art are hidden only to those who do not speak its language. I suppose a good beginning for a novice might be—a navis. A person who knows no Latin might say that the “hidden meaning” of navis is “ship”. That is not a usual way to speak about language, however, and Christian iconography is a language. Hence demystification may be available even without reference to the Knights Templar or Opus Dei, but it does involve language study. This is not to deny that pictorial language differs from verbal language. The vocabulary of the one is things, that of the other words. In ordinary language words mean things; in iconographic language things also mean things, and things other than the things denoted by the words to which they are attached. I am sure you are following this, but since a picture is worth a thousand words, consider this navis or rather navire in a piece of nineteenth-century folk art: 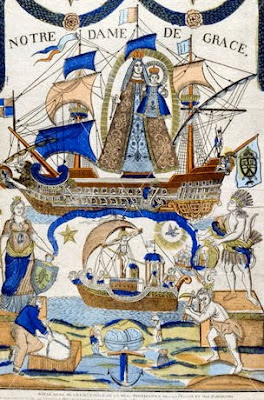 Q: When is a ship not only a ship?

A: When it is also the Virgin Mary, the doctrine of Atonement, and seventeen other things

I cannot teach the whole language of Christian pictorial iconography in a single post, but I can at least do better than Dan Brown—except on the vulgar business of making millions, that is. I can introduce you in a few hundred words to the basic principle of iconographic analysis in Christian art. I have been surprised to discover from information provided by blogger.com that Gladly Lerne, Gladly Teche has many visitors daily from outside the United States. This should mean, if the pedagogical premise of this post is valid, that several people are looking with utter puzzlement at the picture below this paragraph. It is a photograph of one of the nine appliquéd fabric squares from a hand-made quilt, produced by an unknown American seamstress and dated 1933, recently sold by a leading Oklahoma dealer in folk-art antique fabrics. 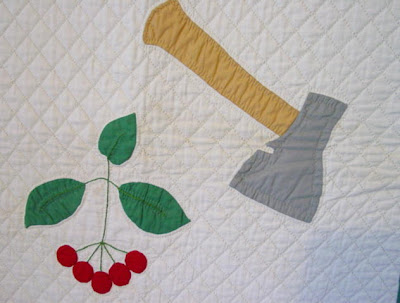 For my fellow Americans my expectations are different. Every American who sees this image should know immediately what it means. The subject matter of the image is a cluster of cherries and a hatchet; but its meaning is “George Washington”! If you don’t see that, you have entirely missed the essence of the work of art. If you do grasp the meaning, you have grasped the essential iconological principle of medieval and Renaissance art.

For in the year 1800 an obscure Episcopal priest, the Rev. Mason Locke Weems, published his Life of George Washington. In this semi-legendary but vastly popular work we find for the first time an anecdote of the early years of the father of our country. Some foolish person gave young George, aged about six, a hatchet. The lad went about experimenting with this dangerous tool. He tried it out with fatal results on a cherry sapling recently planted out by his father. No one had seen the crime in its commission, and young George might have evaded his father’s wrath through prevarication or strategic silence; but such is not the way of a hero. “Father,” he said in response to inquiries, “I cannot tell a lie. I did it with my little hatchet.”

It is possible, though doubtful, that the story is true. It is possible that Weems simply made it up. It is also possible, as Weems claimed, that it derived from an old oral tradition within the Washington family. It doesn’t matter. Forever after in the moral theology of American civil religion cherry trees and hatchets would have a definite ethical meaning. Many Americans could hope to believe, and long did in fact believe, that the icon of the cherry cluster and hatchet meant that the kind of person who would become President of the United States was the kind of person who could not tell a lie. Well, it all depends what the meaning of meaning means, I suppose.

The great source book of European painting for about a thousand years was the Bible. It was not the only source book, but it was so pre-eminent that the eighteenth-century artist William Blake could still call the Bible “the great code of art.” It’s where Giotto and Jan Van Eyck and Tiepolo got most of their cherry trees and hatchets. I commend it to all museum visitors.

As for the image at the top of this post, it is a painting by the great Venetian painter Giovanni Bellini (+1516), now in the Courtauld Gallery. Its subject matter is the murder of a Dominican saint, Peter of Verona, usually called Peter Martyr, on April 6, 1252. That is its subject. Its meaning, which is known only to me and to two Rosicrucians in Thuringia, is a different matter. You cannot expect to get that free for nothing in a blog post. You will have to await my projected novel Giovanni Bellini and the Temple of Doom. It’s about this handsome, brilliant retired iconographer who one day picks up a men’s magazine in his urologist’s waiting room and stumbles upon…well, as I said, you’ll have to wait. 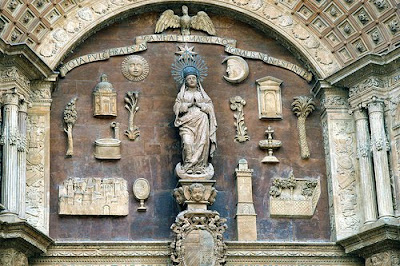 Palma de Mallorca: the Cathedral / a medley of Marianisms
How many can you identify?